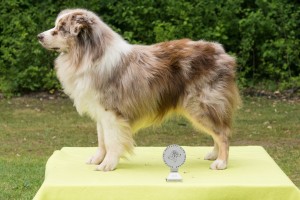 Jones at almost 13 years of age! 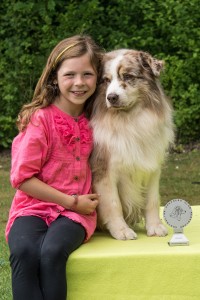 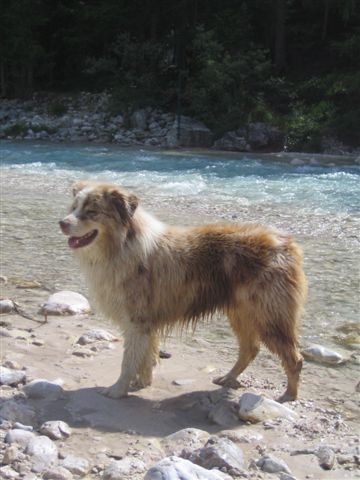 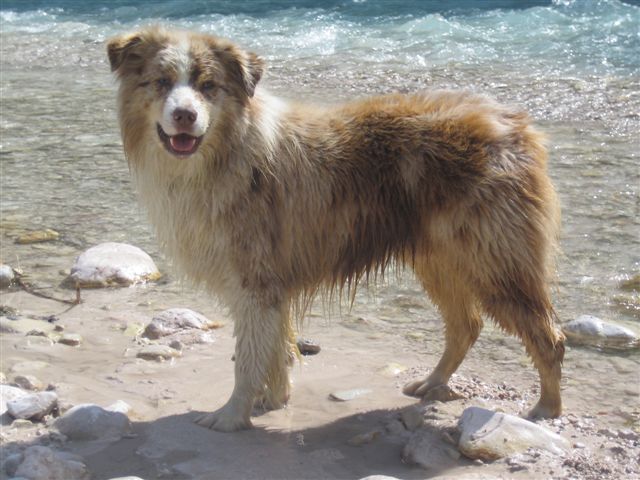 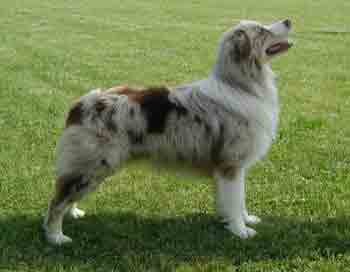 Jones joined Tigger and me to the World Cup Series Finals Dog Frisbee in Scottsdale, Arizona on 3, 4 and 5 November 2006! Jones won the 8th place in the throw & catch competition. 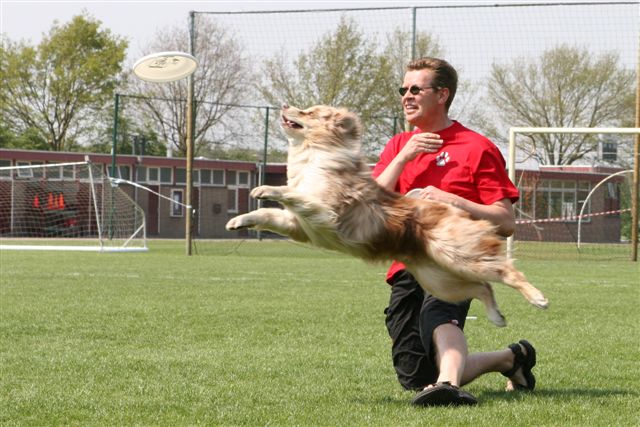 Mr. Jones is Cajun’s son out of her first litter. Mr. Jones was a good help with our sheep and ducks, loved to play frisbee, was very agile, liked obedience, doggydancing, agility and the kids! He was very outgoing, friendly towards strangers and a real gentleman. He’s been with us on vacation many times and especially liked to hike in the mountains and swim in the rivers. Jones also helped me out at the dog training school a lot. He had a fabulous temperament, a wonderful gait and a very nice will to please. He worked, as my other aussies, in the youth jail a couple of times a year. He always worked with the kids that are scared of dogs. Jones was just wonderful… He also worked as a therapy dog with handicapped people and with children who have difficulties reading and concentrating. He’s been on Dutch television and in the radio studios many times. He loved to get attention and was extremely friendly towards people.

Mr. Jones got his first reserve winners dog at the age of one year under ASCA breeder-judge Carol Ann Hartnagle at the ASCA show in Königswinter in October 2001. She said to me: this is really, truly an Aussie! He got a fourth place at the Winner in 2001, a reserve championship in Zuidlaren in 2002. At the conformation show at Leeuwarden on the 21st of April 2003 Jones scored his last point for his Dutch Champion title. Jones is the first Australian shepherd male who was bred and still lives in Holland who received this title. At this conformation show he also participated in the brace class with his brother Barrel with 25 other couples. And they won the class!!!

On the Australian shepherd Championship Conformation Show 2002 Jones became the winner in the breeder class and reserve winner of 47 dogs.

And….. he did it again in 2004 by winning the bred by exhibitor class under American judge Marjorie Tuff and he was reserve winner dog again! Barrel and Jones got the first place in the brace class and Jones and his brothers Barrel, Cinnamon Twist and Cajun’s Mix got the price for the best breeder group, all at the same show with 104 entries! Jones made his debut in the frisbee championships. He and Hans participated at the NK- and EK. He got an 8th place at both events and a 9th place at the Mitch Challenge Cup. With Karen he achieved the 13th place at the European championships in Belgium 2004.

Our Mr. Jones has passed the very heavy behaviour test for the “child and dog program”. So he visited schools at regular bases with Karen to teach children how to behave with dogs. Jones is the second aussie in Holland who has passed the very heavy behaviour test. We also visited schools to help children with reading. He’s doing a great job with children who are scared of dogs; we have been doing therapy sessions many, many times together. He’s also wonderful with handicapped people. 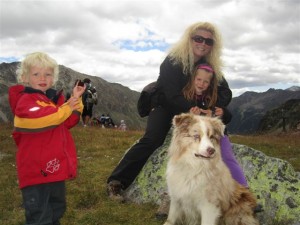 Jones, Tigger, Hans and I were asked for regional television to make a program about dog frisbee in October 2002. Jones also participated in a promotion video for a county in the eastern part of Holland. And Jones, Tigger and Karen gave a dog frisbee demo in the break of a soccer competition at the full Heracles stadium in June 2004! Jones and I have been on tv and on the radio many, many times. He’s been one of the “people” sitting around the table of a famous Dutch tv program. We were extremely proud and happy with this wonderful aussie.

As you can see Jones traveled with us all around the world, enjoy these awesome pictures! 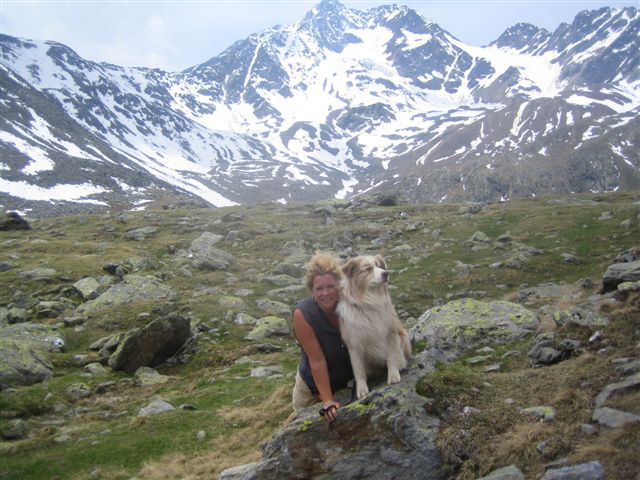 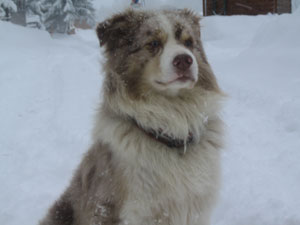 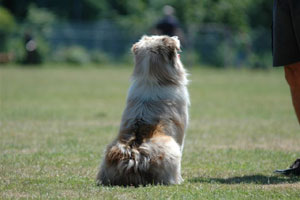 Jones in Switzerland, patiently waiting for the frisbee and working with the handicapped 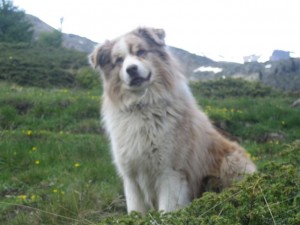 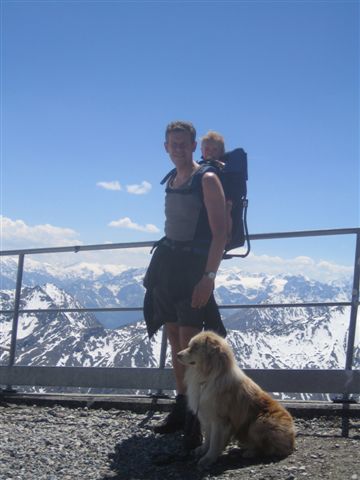 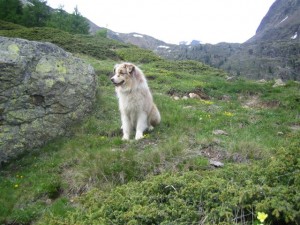 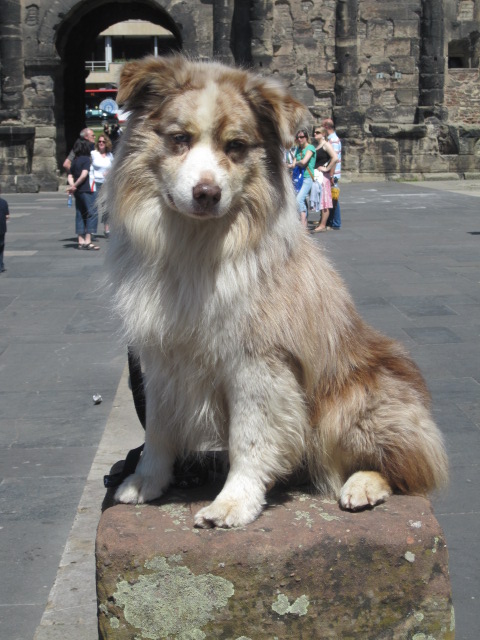 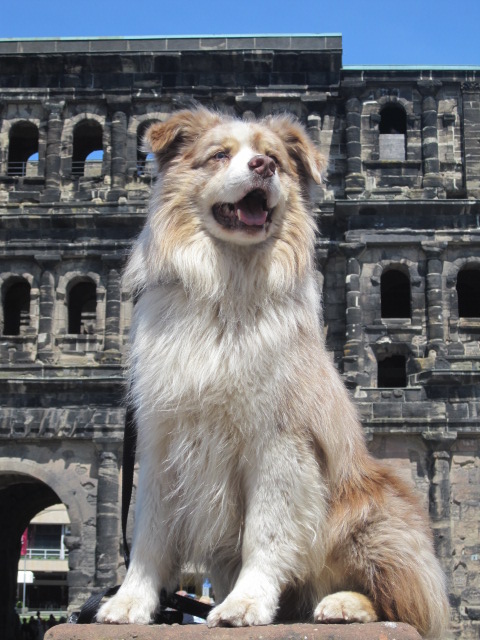 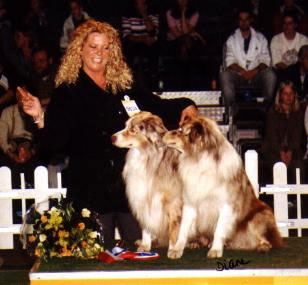 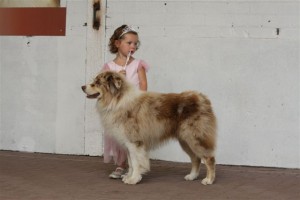 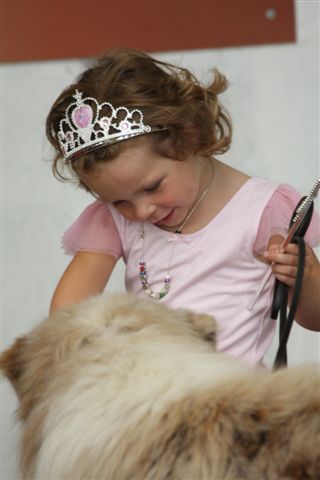 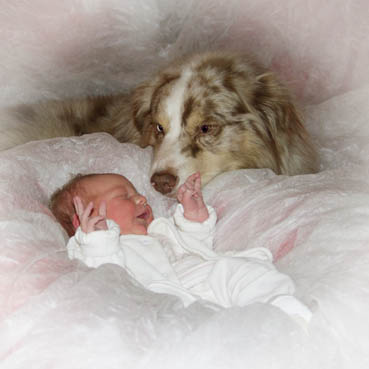 The birth cards of our children… 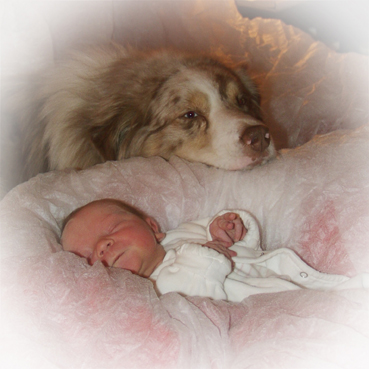 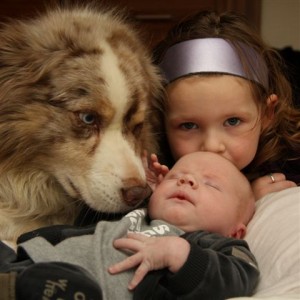 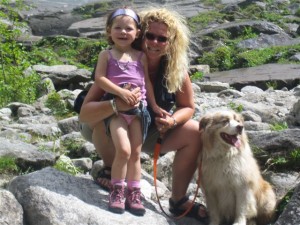 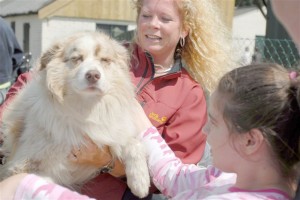 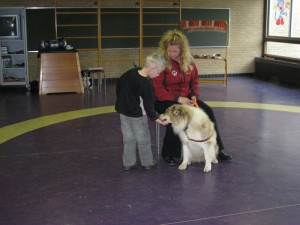 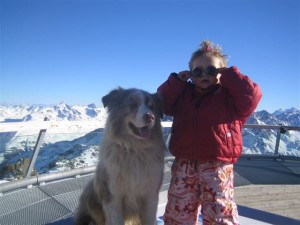 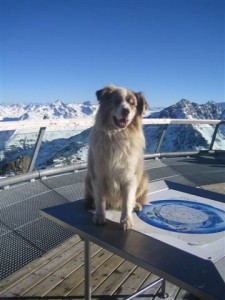 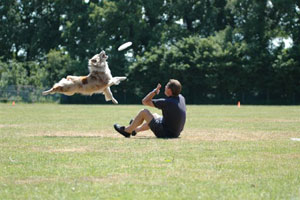 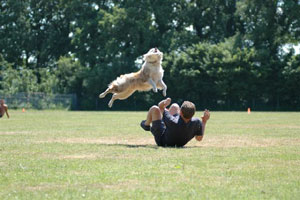