We are Hans and Karen von Piekartz-Mulders and we have two children, Amy (2005) and Lewis (2009). I, Karen, own a dog training school and education center, Happy Tails. I teach about 25 hours a week and I’m also a dog behavioural therapist. Furthermore I visit schools with my dogs to teach children from the age of 4 – 7 years how to behave when dogs are around, how to pet dogs, etc. We also read with children with our dogs and about 6 times a year we visit youth prison, where I give workshops with my dogs. I have a school for dog training instructors and dog behavioural therapists. We also train therapy dogs. And….. I’m also a breeder of the beautiful breed Australian shepherd.

Right now we have three horses (Fly, King & Ikanante) sheep, rabbits, cats and of course dogs! We also have a bunch of pretty co-owned dogs. 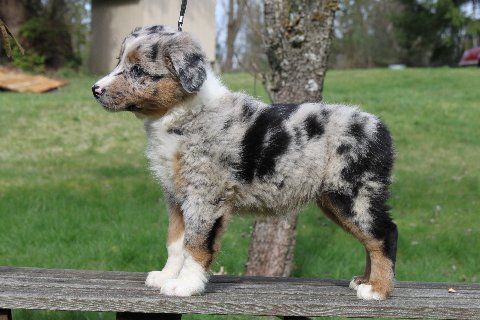 I, Karen, fell in love with the Aussie years ago in ‘93 when I lived in Washington D.C. I went to the world championships frisbee with my two labradors Tess and Jill and we were watching those flying dogs. Then I saw a very pretty dog that I had never seen before. He was kind of blueish with very pretty blue eyes. Yep, it was a blue merle Aussie. I started to read about the Aussie and when I returned to Holland I was looking for Aussies at the shows here in Holland. At one show I met an American lady who lives in Holland now and she had a beautiful black tri bitch with her. I talked to her for a while and I saw her again at a Winner show in Amsterdam.

I also met a red merle dog that I really liked a lot. Later on the black tri bitch turned out to be Zoie (Champ. Briergrove Charcoal Briquette) from Diane Huismans and the pretty red merle dog was Jack (Champ. War Drum of Imagineer) from Joost Boer and Klaske Bouma, Tiggers parents. What a coincidence.

A few years later I decided to get an Aussie. I contacted the ASCN and they told me there was a litter in Friesland with Diane Huismans. One puppy buyer did not want a black tri bitch, as she had a blue eye. I went to Diane, watched the litter and I fell in love with my first Aussie, Tigger, out of Zoie x Jack. Things can go very strange.

Half a year later I talked to Diane about getting an adult female Aussie from abroad, because I decided this was my breed and I would like to become a breeder of Aussies. A few weeks later Diane called me and told me a good friend of hers in Canada had a female red merle Aussie and was willing to sell her. Diane met this red merle bitch when she was one year old and told me she was a very friendly and good looking girl. However, I just could not just let her be shipped to Holland without looking at her personally. I decided to fly over and if I liked her I would bring her with me to Holland. So I went to the States in January 2000, drove over to Canada and went to Debbie Nolan of the Briergrove kennel in Ontario. Debbie, like Diane, has lots of Aussie knowledge and I had a great time and learned a lot about Aussies over there. The red merle Aussie was Cajun and I fell in love with this couch potato right away. So I took her home……. Cajun and I stayed with friends in Potomac, Maryland for another week, visited Washington DC together and we developed a good relationship really quickly. Cajun is my foundation bitch; she had her and my first litter in September 2000 and from that litter I kept Somethin’ Spicy My Name is Mr. Jones. I have never regretted my choices and I am very happy that I met breeders like Debbie Nolan and Diane Huismans. Diane became a good friend of mine and she’s the one that helped me a lot with the breeding. Diane has lots and lots of knowledge about heritage, genetics and blood lines.

I made the decision to breed Aussies with good working instincts, good temperaments, good health and that are nice enough to show. To me an Aussie should not be too big, not have too much hair and must move well!!! So working lines in their pedigree is a must for me and healthy lines are also very important to me.

We find living and working and doing lots of fun stuff like frisbee, dog dance, obedience, agility, herding, taking them with us on vacations, etc. important! Our dogs are pets, they live in our home, they are my friends, we work together. Breeding is not my priority, but working and having fun with my aussies is. However, when I breed, I want to do it the best I can. I try to breed good family dogs that have the bright aussie looks and bright aussie minds. My aussies have lots of working lines, simply because working lines still have the ability to work what they were bred for and because they are way more healthy than the show lines. I spend a lot of time socialising the pups, preparing the pups for the rest of their lives. And once we have a dog, he or she will only leave us when our dog dies…

We hope you like our website and we look forward to many new contacts! If you need any information, just e-mail us or call us, either in Dutch, English or German! You can reach us at (31) 06 54967844. 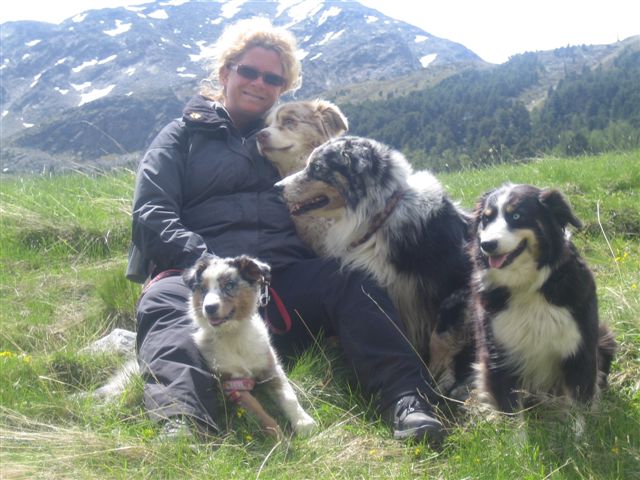 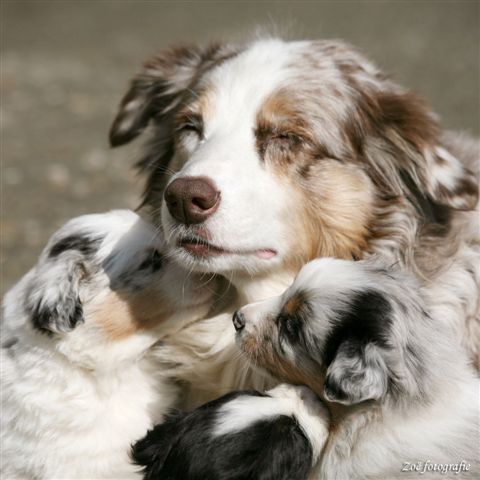